more images are in the gallery

Corona, USA’s first operational intelligence satellite, carried sophisticated optical cameras (KH-4B system) to acquire imagery of the Earth from space at an altitude of 80 nautical miles (150 km). It was launched in 1967. The camera system included two 24-inch focal length, f3.5 panoramic cameras with separate forward looking and rear looking capability, and a tilting angle of 30 degrees to take stereoscopic photos. Films taken by the camera were contained in a capsule. The satellite was designed to de-orbit the film capsules from space, which were recovered in mid-air by specially equipped aircraft.

Declassified in 1994, the photos taken by the satellite constitute a valuable source of historical information for study of environmental changes.

IKONOS (pronounced eye-KOH-nos), owned by Space Imaging, was launched on September 24, 1999. It is the world’s first high resolution commercial satellite to offer imagery to the private and public sectors. At an altitude of 400 miles (680 km), the satellite collects imagery that can distinguish objects on the Earth’s surface as small as one metre square in black and white and four metres square in colour.

Landsat was called ERTS (Earth Resources Technology Satellites) when it was first launched in 1972. This series of satellites was renamed Landsat in 1995. Administered by USGS/NASA, Lansat-5 acquired only colour images of 30-metre resolution. Landsat-7, which launched on April 15, 1999, is orbiting the Earth at an altitude of 705 km. It acquires black and white images with a resolution of 15-metre and colour images with a resolution of 30-metre.

Unlike the Corona satellite which captured imagery on photographic films, IKONOS and Landsat satellites carry sensors to collect electromagnetic radiation reflected from the ground. The data ware converted into electrical signals and then transmitted in digital form to a ground receiving station. These digital data are subsequently processed to generate images. The imagery is composed of a matrix of pixels. Each pixel represents the amount of light within a spectral band reflected from the Earth’s surface. Using various combinations of spectral bands, different techniques of image processing and enhancement as well as merging of different remotely sensed data, spectacular images can be generated to highlight particular features to facilitate interpretation and analysis. 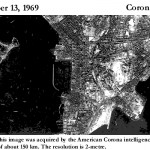 What were the major changes in Kowloon peninsula over the 30-year period from 1969 to 1999? 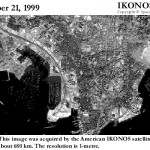 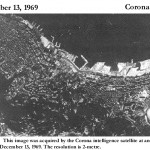 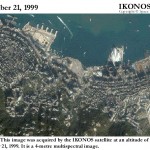 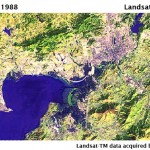 This image was acquired by Landsat-5 satellite at an altitude of 705 km in December 1988. It has a resolution is 30-metre. 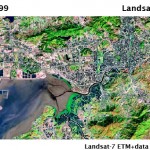 This image was acquired by Landsat-7 at an altitude of 705 km in December 1999. It was produced from merging 15-m resolution panchromatic data with 30-m resolution multispectral data. 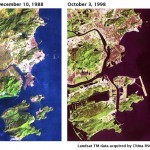 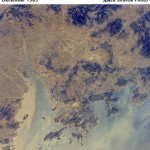 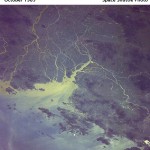 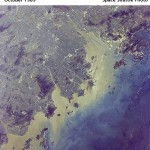 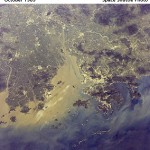